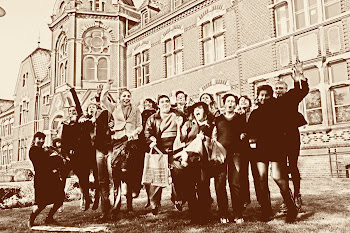 “Hajnal Németh’s installation Crash – Passive Interview will be on show in the Hungarian Pavilion at the 54th International Art Exhibition of the Venice Biennale in 2011.”

The space is relatively welcoming, an air of mass sounds from the adjacent room. You face the main entrance where a few golden steps divide you from the license / plates hanging on the wall.

Each of them carries the European star-circle on a blue background – the only ironic skirmish thrown to our beneficent Union in this sad, very sad Biennale. 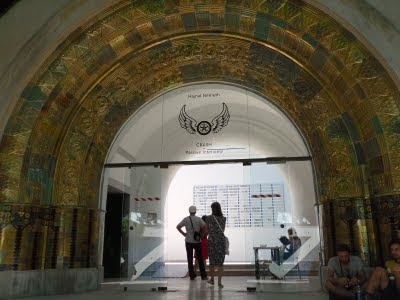 La Biennale di Venezia is as old as Art Niveau. 28 padiglioni celebrano 30 paesi (countries, or so) in the Giardini. The visitors walk through these mausoleum-looking-buildings without hint of their interior: Russia whispers from the wood in echoing words: “I wonder why I lied to myself that I had never been here before. In fact, it’s just like anywhere else here, only the feeling is stronger and incomprehension deeper.” The United States presents Gloria on the tanning bed. Entering die Schweiz the visitor becomes as fragile as the emptied death he meets there. On the other hand, the Hungarian pavilion keeps its promise: take your hat off and beware you´re entering a memorial place.

The winged wheel spins over the glass, surrounded by a golden arch. There´s neither name, birth- nor death-date for the visitor to commemorate. Some letters, instead of numbers, signal the vehicles that presumably got crashed. Is it a European common grave, which celebrates the high speed fallen heroes? There´s no speed limit on the German high ways and it´s never respected in other countries anyway. Cars do not respect it in primis, drivers indulge. Bow and pray, you´re entering the turnoff drive.

Wim Wenders´angels des Himmels über Berlin are evoked next to the cofani and car-windows, their wings are hardly seen moving in the rear-view mirror. No sense of waste, no ruins nor wrecks: the car got smashed as if into a birth-bath. In the darker room on the right you see who´s singing the opera. The black young man, standing between two high rows filled with car wheels, looks at you and sings from a wall-wide canvas. These victims are young and happy souls, they hadn´t lived long enough to enter death with dirty feet; they must be standing in line now, confused, in the limbo of this criminal Europe: Where no one ages, dying like birds hunted down. 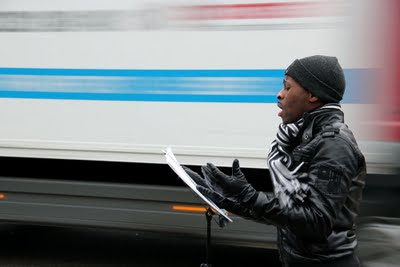 These angel-like victims fell into death like into a dish washer: their wings were as clean as freshly washed bed sheets. European souls smell like clean sheets, of soup and bubbles – like the bright blue and brown eyes of new kids. It´s the invisible war we wage with banknotes. Hold the libretto. Cars bring us into death like the incubator brought us to life – an existence with no blood: we dream of new metal plastic cars, painless as a handful of blue and white pills. Venice´s canals are a heap of dirt, they miss Toyota and Ford, Mercedes and Volkswagen: no one to cleanse the streets with smart high speed.

“Were you late?” The young man sings – and he himself replies. He´s the victim and murderer. His innocense has died and killed. “Yes.” “Was your seatbelt fortunately, fortunately fastened?” – “Yes, yes.” He asks and confesses. Are we in hell, in life, in a lab or inside a hospital? There´s a conscience trial running – as clean as a good drive. Sterilized. You leave the room with the lyrical projection – and in a lighter wide corridor the music desks of the orchestra stand alone. 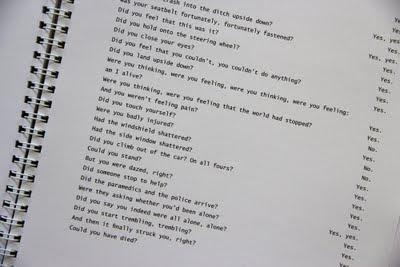 Hold at the libretto. At the end of an opening to a wider room you distinguish a car. You know it is crashed, broken, smashed. I feel like turning back. “Did you hold onto the steering wheel?” – “Yes.” I proceed slowly. I see the dark car´s hood. “Had the side window shattered?” – “Yes, yes.” “Did you start trembling, trembling?” – “Yes.” The car lies smashed in front of me. The front left side is completely destroyed. I heard that.

Hajnal Németh gave the name Crash – Passive Interview to her installation. What´s an interview and what does passive mean – I wonder. Interviews – it seems evident to me now – is a question of angels. A question of the angels. I think of the clothing of grace and the Zelem. Whether angels were messengers of a salvific oral tradition before, they are those who look through now; they look in-between, intra-view; they play back, they slow down the motion.

Lichtenberg noticed as early as 1773-1775 that we are living through an inflation of time and crisis of the year unit: “Ein paar Dutzend Millionen Minuten machen ein Leben von fünfundvierzig Jahren und etwas darüber” (D564). The Door for the Salvatore to pass through has correspondingly become smaller and smaller, so that neither camel nor Messiah might seemingly get through. Technological angels send the entire shot back- and forward to glimpse through the fibers of memory, leaf through the blueprint – searching for a passage, a beginning or an end. Death is a white page, without commas or dots.

The young man´s lyrical voice continues reciting his story. “Have you fallen asleep, asleep?” – “Yes, yes.” “Were you badly injured?” – “Yes.” The white stream of words flows, and flows. Time´s expansion through the magnifier passes through and through memory´s wide-spanned opened palm. No trace of destiny, no end. The same hill, the same highway gently unravels over the landscape, where the act took place, as the unfolding of memory. The page.

Hold the libretto, bending, folding the sheets. No scream, no sign, no blood. The other continent carries the name of death. Now you sit and listen to this. Now you talk and you listen too. Was it a shield, was the seatbelt any good? It was screams, and pain and blood, all fainted away. You seat and talk, and listen too.

You cannot do anything, you say. Fine, your choice. Angels of no times. High speed ways. Tuck yourself up in the banknote to lie down a moment, enter your coffin-caffeine car, are you ready? Yes. Car or a needle, Europe is going to sleep.

An independent collective of postacademics with an emphasis on poststructuralism; postfeminism; posthumanism; and …well, maybe you get it… with experience in tutoring, teaching, flying, editing, translation, writing, well, you name it!

We offer:
Academic, political, literary, etc.
translations, editing, courses, and one on one tutoring in the following languages:

Italian:
private lessons, editing, proofreading and translation: to and from.

English:
translation: into and from, editing and proofreading.

Russian and German:
translation: from.

Send us an email: coochelo@gmail.com
Prices: The time frame is a key price-determining factor.
Email us a sample page for a free estimate.

1. Stories of Survival: a collection of short stories about self-defense in the 21st century. In progress: 3 stories so far.

2. An essay on fantasy in relation to the works of Judith Butler. In editing.

3. A collection of poems: Synonyms of Breath. In editing.

4. One-Way World: Notes on the Society of the Spectacle. In progress.

5. TBA: We are looking forward to beginning a new collarborative project soon!

6. Research on starting a publishing collective! Want to help?

And, of course: This Blog, readership in the time of corporate spectacle, against the mirage! Please talk with us by writing...

2. Translation and the Hope of Language (Page Pavlov, aka. the Belvinos)

What's happening in the world?! (real news you can act on)